Fruit From Around The World – Durian

Now that it’s Durian season here in Malaysia, I wanted to tell you all about what may be the most Controversial fruit of Southeast Asia …The Durian. 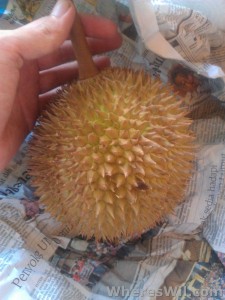 What is a Durian?

Also known as ‘King Fruit’ and ‘Stink Fruit,’ Durian is a large, fragrant fruit covered in sharp barbs. The edible part of the fruit is a soft flesh that surrounds its seeds which can range in color from a cream color to a rich yellow.

This is hard for me to answer.

Durian is banned in many hotels and on public transportation throughout much of Southeast Asia because of its penetrating and powerful odor that lingers for days. Though I’ve heard some individuals describe the fruit’s smell as that of rotting socks, it smells good to me. Like anyone else that enjoys eating this king of fruits, the smell just reminds me of the fruit and I find it truly enjoyable.

Smelling a potential Durian before you buy and eat it is almost intoxicating.

How to Open a Durian 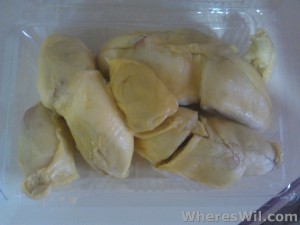 Though often availible removed from its shell and wrapped in plastic, opening a fresh Durian is my prefered way of enjoying this fruit.

A large Durian can rather intimidating for someone who’s never handled one as it has a hard, sharp, barbs covering its thick surface. Many foreigners attempt to machete them open for this reason and locals love watching tourists hack away.

There is however a secret for easy access to this wonderful fruit and all you need is a pocket knife.

First, cut of the stem of the Durian.

Then, while carefully holding the Durian with one hand (as to not stab yourself with its spikes) slide your blade straight down into the Durian, where the stem was removed. 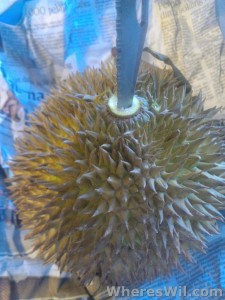 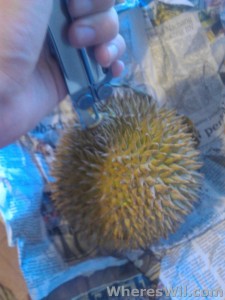 Still holding the outside of the Durian, twist the blade (You could also use a large screwdriver) and the Durian will pop, splitting open. 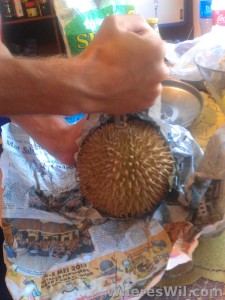 The seed pods contain the fruit and can be collected. 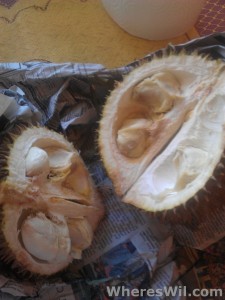 Once you’ve opened a Durian, you can gain access to the rest of the seed pods easily by pushing the outer edges of the fruit down, towards a hard surface (a table or the ground). The leverage will easily open a pod.

How to Eat Durian

Once you’ve collected all of the fruit from a Durian, I recommend refrigerating it (or eating it right away) as I prefer cold Durian.

To eat Durian, take one section of fruit, which easily separates from the row of fruit in a pod, and pop it into your mouth. 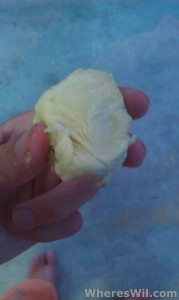 The texture of Durian is creamy (though some can be a bit slimey), almost like a custard and usually can just be sucked off the large inedible seed (though you might need to use your teeth to scrape off the last bit). 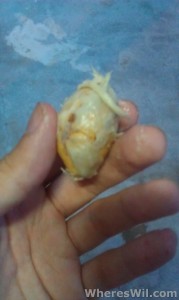 The taste of Durian varies tree-to-tree but a good Durian taste rich and sweet.

Warning: Many say that Durian is an acquired taste. First time Durian eaters are often put off by the smell, texture, taste (or the crowd watching the foreigner eat Durian).

…If you don’t like a Durian, it is also possible you’ve gotten one from a bad tree.

How to Select a Good Durian

Selecting a good Durian is tricky since the fruit is hidden in its shell. You are unable to see how much fruit the Durian contains or how it tastes.

There are some “Name Brand” Durian genetics that are all grown from grafts on orchards. These are often worth the extra money but if you’re buying from a local, roadside vendor it’s best to get his help in picking your fruit.

You’ll want your durian to be as fresh as possible so buying in the morning (Durians fall at night) might be a good approach and you want your Durian to have a powerful smell (often better taste but not always).

Ask your vendor if they can open one up for you to see or taste and get their opinion of which one they think is best (you may want to avoid doing this in a touristy area where the seller is less likely to want to impress the foreigner with a tasty Durian).